What is Trail O?

For a full description of Trail O check out the Trail Org website.

Conventional orienteering combines fast running with precise navigation, typically through forests or over moorland. Trail Orienteering (Trail O) is a discipline of the sport designed so that people with disabilities could have meaningful orienteering competitions. It completely eliminates the element of speed over the ground, but makes the map-interpretation element much harder. Able-bodied people can compete on equal terms with the disabled.

Waterford Orienteers in association with the Office of Public Works will host a Trail Orienteering event as part of National Heritage Week on Sunday August 31st. The come and try it event will take place at Kennedy Arboretum with start times planned between 11 and 2. The event is open to all.

There will be 10 control sites in easy view of the main tracks so access is not an issue. There is no restriction on wheelchairs being pushed although the park is fairly flat. At each stopping point, the competitor will be given 3 choices (a, b, or c) to decide where the flag or kite should be correctly placed. There will be no timed control. The idea is to get all 10 controls correctly located. There is no time limit.

For details about the Arboretum check out the Heritage Ireland website.

More information will be posted later in the Summer on this Blog and also on the Disability section of Waterford Sports Partnership. 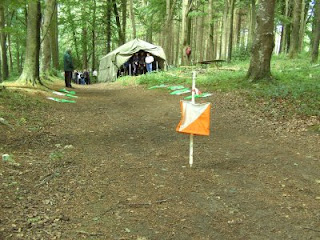 By kind invitation, I travelled up to Stradbally in the early hours of Thursday morning to observe the workings of the DFO All-Army Championships. As newly appointed Development Officer with the IOA, I was interested to see how the DFO organise their events.
On arrival at Oak Vale Forest, I was relieved to find there were Portaloos.
At the JK in Bristol, I had experienced the 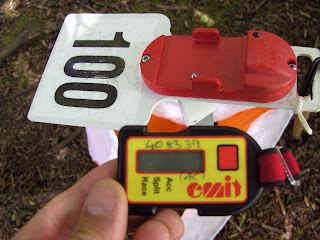 EMIT system but this was a chance to look at the alternative more closely. The photo shows how the tablet that you carry around with you instead of an SI card is placed on the control. It gives a reading of the control number which is always a help but it does not beep. For me it is another thing to read with my wonky eyesight and I prefer the beep on the Sport Ident system which I can hear.
At 9.15, I headed off on Course 4, a lengthy 7.5 km with almost 300 metres climb. Oak Vale forest has some nice deciduous blocks and is largely runnable. Some of the later craggy areas had a bingo feel due to the variability of ground cover. An enjoyable run even though there was sometimes more navigation in the circle than between controls!!
Download and then a welcome cup of coffee and roll and chat over the courses with other early runners who were doing a little bit of checking in return for the run. The early sun gave way to some heavy showers but as ever the army were prepared with their tents for shelter.
Back out with a camera to surprise a few runners. Settled into a depression and almost witnessed Ruairi Short taking his eye out with a branch. 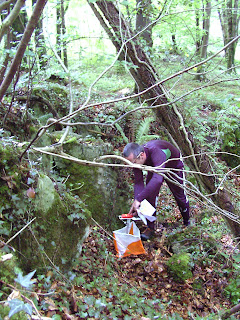 Thanks to Pat Farrelly for his invitation and to all his team for their excellent organisation. 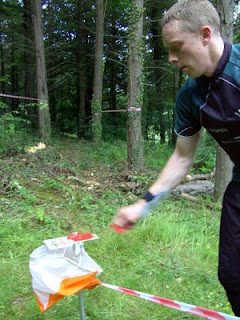 Please note that the Score event due to take place last Wednesday was postponed due to the awful weather. It has been refixed for Wednesday 25th June at Tower Hill, Portlaw.
We look forward to you being there. Scouts up to 7.30, everyone else mass start at 7.45. 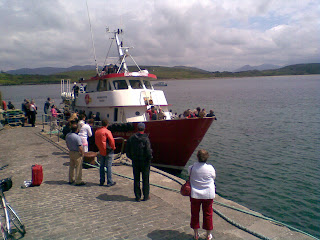 The Irish 3-day event returned to Inishbofin after a two year absence. Once again the sun split the rocks. The lengthy car journey from Waterford up the river Suir to Cahir castle via Carrick and Clonmel is the easy bit. Heading onward to Limerick via ,that blink it and you miss it, Limerick junction, the road gets twistier. Limerick to Galway is not bad after all the investment on the infrastructure around Shannon airport and the need to whizz coachloads of Americans off to Connemara. Galway city to Clifden along the N59 has seen major improvements in recent years but is still slow through Moycullen and Oughterard. Reaching Maam Cross, you get the feeling of being in the real Connemara with peat bogs and spectacular scenery. Last sign of civilisation at Clifden before the islands. Take the ferry at Cleggan for the 45 minute trip to Inishbofin. You arrive in past Cromwells fort which guards the entrance to the harbour. Busy weekend, two weddings (and no funeral) has booked out the island. Negative effect in that it reduces the number of orienteers that can get non-tent accommodation and makes the ferry very busy. On to our accommodation at the excellent Galley B and B/cafe on the east end of the island. Do not mention the Corncrake to those bleary eyed residents who in the interests of preserving the habitat of the bird under the REP's scheme have to listen to that blasted noise all night. What does the east end have that the west does not?...the best two sandy beaches.

On to the orienteering...day 1, short and not too technical but very steep in places on the west end of the island. Day 2 in the Middle Quarter close to the new runway was the long day with the most difficult part being navigating the new tracks close to the runway. Day 3 was close to the harbour and mixed fast running around the fort peninsula with tricky open terrain further east.
All round an excellent weekend brought to a fine conclusion by the playful antics of a school of dolphins as we docked in Cleggan. 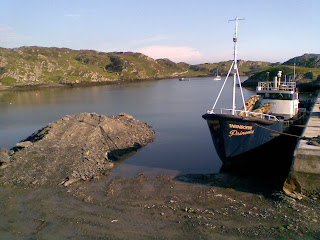 If you get the chance next time round, I would give it 1o out of 10 for fun (oh and some orienteering!)