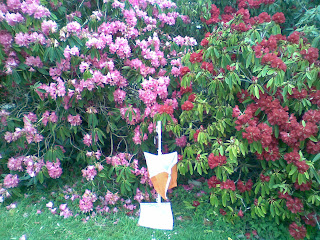 Rhododendron in full blossom...the summer is on it's way. 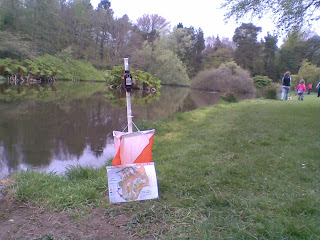 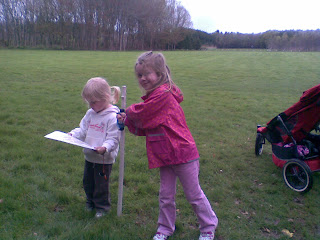 A family day out...you are never too young!

Thanks to Angela and Laura for help with registration and download.
Full results are loaded to the IOA website

The Sprint O format at the JK 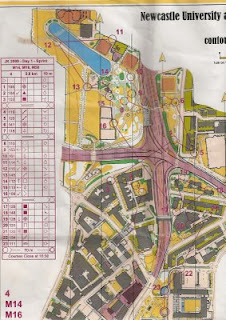 The most obvious feature of this map at the 2009 JK Sprint held in the centre of Newcastle is that the main road, the A1 runs right through it.
Even when I had finished, I am not certain that I took the right route choices over and under the roads. The key though is to make the decision and stick to it. You cannot afford to change your mind or stop and think.
The scale is 1:4,000 which means that 1cm on the map represents 40 metres on the ground.

3 controls...just under 2 minutes, not bad....next 5 controls in the top 30, just under 8 minutes gone...no time to look at the pretty flowers...quickest leg 10 to 11 in 5th fastest time...slight pause in decision making, 58th on the short leg around the tennis courts to 16...another half minute error by taking the wrong way over the motorway to 17 (78th place on the leg)...steady in the next few legs around the university buildings....final flourish, 9th fastest 22 to 23 and 3rd fastest on final sprint to the finish line. They always say that if you are fast at the end, you have left something out on the course!!!
End result: 3 minutes 33 seconds behind the leader in 37th place (out of 105 competitors) in the M50 course. 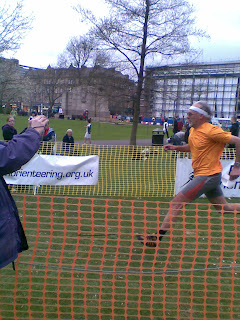 In drawing up a template for the setting up and use of POC's (Permanent orienteering courses) I visited and evaluated one the exisiting POC's in Ireland. Sean Cotter has done excellent work in producing maps of 4 parks in Cork City. Maps can be downloaded in pdf format with or without control sites marked on them from the Cork City Council website. The parks that have been mapped are Clashduv, Glen Amenity park, Marina and Murphy's farm.
I looked at Marina which was mapped in 2006 to see what we could learn from it. Our understanding of POC's has moved on since this map was made.
I visited all of the control sites.
What marking is used to indicate the control site?
In this case red and white paint with two letters and the number corresponding to the control marked on the map. The problem is that these weather and in many cases I found it hard to distinguish the letters and number. 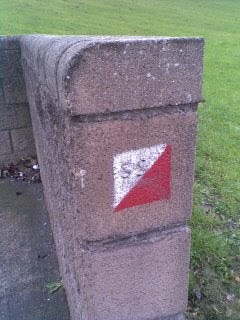 What constitutes a good feature to use?
The feature has to be permanent yet allow the user to identify a range of standard features used in orienteering. 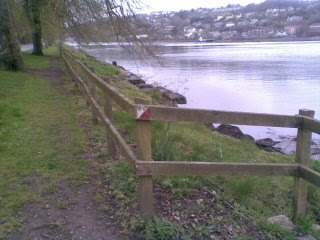 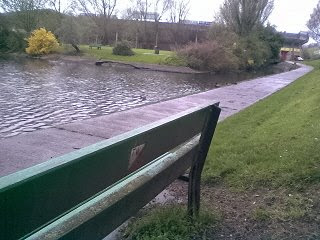 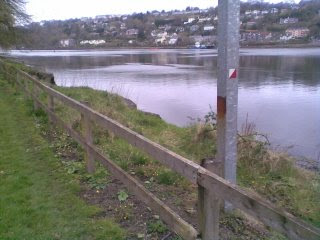 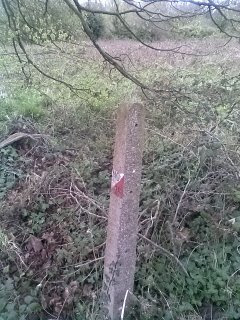 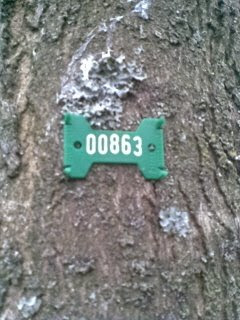 A tree number sign...a red and white equivalent may be the easiest to maintain and replace.

Who will maintain the control sites?
I spoke with the new Sports Development Officer with Cork City Council who stated that it was the responsibility of the Council worker in that park. I found 3 control sites missing. 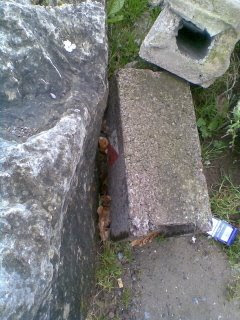 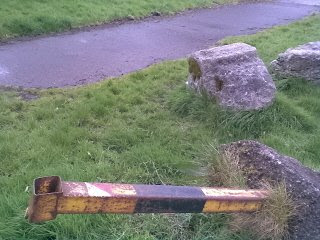 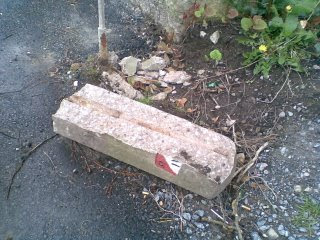 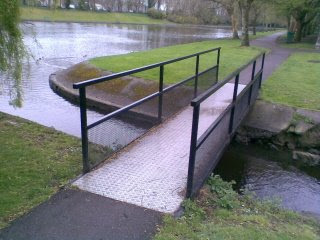 A new bridge but the original marker is missing (or else I could not find it)
What features can be highlighted? 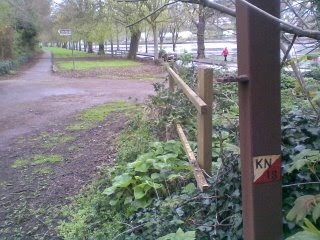 The line of the old railway is an attractive feature of this map. 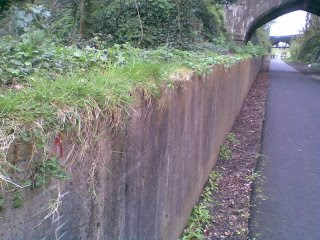 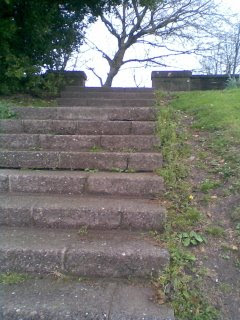 Steps are another which are useful especially in Street O events.
What possible dangers are there? 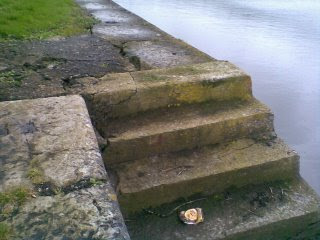 This is not a great location for a control site...look at the second step...this is just beside the river Lee! 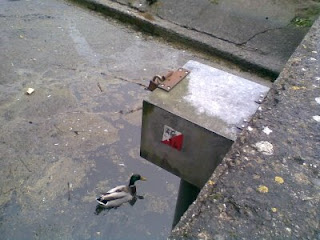 This is an interesting placement on a metal box attached to a bridge. 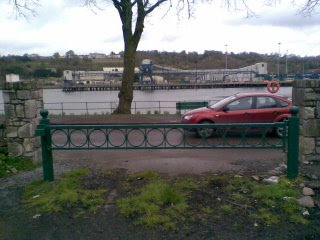 Another thing to look out for...are there any roads (no matter how small) to cross? This one beside the river Lee was crossed several times. 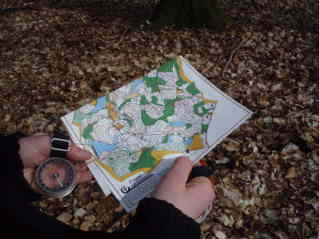 Thanks to Eddie from CNOC for the photo


Last weekend, Laura and I competed in the Leinster Championships in Rossmore forest, close to Monaghan town. This is an excellent map with plenty of intricate detail.

Running in the M50 category, I started confidently, taking the first 7 controls without any great difficulty. Contouring around a small drumlin to the 8th control I made a 2 minute error of judgement as I misidentified the track I was seeking. Picked up speed again to hit 9 to 13 without too much difficulty. The next leg gave a route choice to the east or west of a lake. I chose the eastern route as the person ahead of me had gone for the western route. Along a fence in an area of small deciduous trees, crossed the fence at the corner, small area of low brambles, out on to the path. Headed north along the path, past the end of the lake and then blip....! I reached the edge of an open area where I had planned to head into the forest...but what's that in the distance? Tents, people running, Irish flag....oh no, I have somehow got back to the finish!?

Retraced my steps to where I had left the forest and met the track...15 minutes later I decided to continue on and try the route I had intended all along...I had been right...the mind plays silly tricks! Annoyed, I ran fast to make up time...16 to 21 and the finish no problem. Then, second place by 9 seconds! Oh, what might have been.
Full results on the IOA website 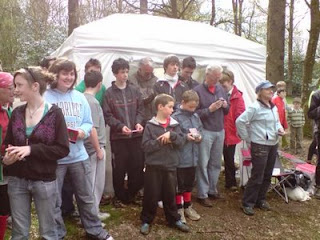 Laura and I in a group photo for runners up.